One of the joys and surprises of networking is never knowing exactly what the outcome will be!

On Saturday April 18th in Mumbai I was privileged to be present when the Steps India team presented a three hour Learning and Development Workshop for the South Mumbai Police on the theme of Emotional Intelligence. The delegate group of forty police officers totally engaged with the interactive drama. This is the first time Steps has worked with the police since we did a programme for the Black Police Association of the Metropolitan Police about fifteen years ago. So, why was it that we were delivering this programme?

In 2012 I attended one of the regular monthly British Business Group meetings at the Trident Hotel, Mumbai. All attendees who were there for the first time, like me, had to stand up and introduce themselves and give a brief description of their business. This I duly did. When the official meeting ended copious supplies of drink and food were provided, and networking began. A British businessman living in Mumbai came up to me, introduced himself, and commented that Steps sounded an interesting idea and said that if I ever needed a shoulder to cry on, while attempting to build our business in India, he would be happy to provide the shoulder! So began my friendship with Nigel Lang.

One of Nigel’s friends in Mumbai is an American, Kia Scherr. On November 26th 2008 Kia’s husband and thirteen year old daughter were staying at the Oberoi Hotel in Mumbai having been on a spiritual retreat in India. Kia was back at home in Virginia, USA. November 26th was the day that the terrorists landed in Mumbai and killed 164 people, two of whom were Kia’s husband and daughter. Kia decided that peace and reconciliation were the ways that she was actively going to deal with her grief. To practically apply those aims, she set up the One Life Alliance. One Life Alliance is dedicated to raising the world’s peace index through collaborations with businesses, governments and bodies of education.

Through her networking Kia, who spends a lot of time in Mumbai, met with the South Mumbai Police, who had had to deal with the horrific events of 26/11. A senior officer suggested that developing an awareness of emotional intelligence among the police could help in Kia’s aim of raising the peace index of Mumbai. When Kia told Nigel about the conversation, Nigel suggested that Steps would be a good organisation to create a lively and engaging session for the police. The pieces of the jigsaw were beginning to fall into place.

Mohan Madgulkar, Head of Steps India, and Shruti Sridharan our Programme Leader in Mumbai went to a meeting with Kia, Nigel and Krishna Prakash, Additional Commissioner of Police, South Mumbai Region, and the programme was commissioned. Shruti spent many hours with the police to research the programme and then write scenarios that would exactly mirror the culture and life of the South Mumbai Police.

The result was a truly inspiring collaboration that brought home the human and behavioural side of conflict management and how to enhance emotional intelligence in challenging situations. The event was attended by a number of journalists from regional and national newspapers in India, many of whom documented a resoundingly positive response to our partnership with One Life Alliance and the South Mumbai Police.

“To make us (police) fight terrorism, Kia Scherr is not augmenting us with weapons but making us emotionally intelligent through her acts. She has roped in an international theatre team for this project. The idea is basically for cops to adopt a positive attitude,” Krishna Prakash, Additional Commissioner of Police, South Mumbai Region

“Stressful working conditions and many others factors play a key role in the rude behaviour of the police towards the public. This training session will help cops to change their attitude,” Police Officer, South Mumbai Region (Delegate)

Given the success of this intervention, we are now hopeful that more funding will become available – enabling the partnership and the positive work to continue with a wider cohort of police teams. 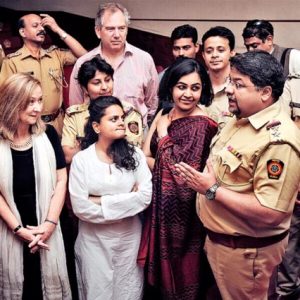 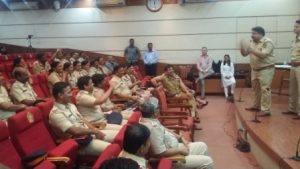 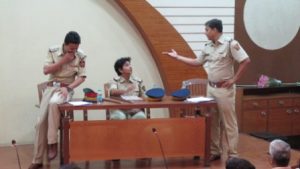 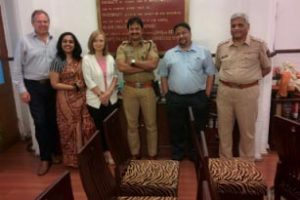